The one I won't be preaching .

John 3:25-36  CEB
25 A debate started between John’s disciples and a certain Jew about cleansing rituals.26 They came to John and said, “Rabbi, look! The man who was with you across the Jordan, the one about whom you testified, is baptizing and everyone is flocking to him.”

27 John replied, “No one can receive anything unless it is given from heaven. 28 You yourselves can testify that I said that I’m not the Christ but that I’m the one sent before him. 29 The groom is the one who is getting married. The friend of the groom stands close by and, when he hears him, is overjoyed at the groom’s voice. Therefore, my joy is now complete. 30 He must increase and I must decrease. 31 The one who comes from above is above all things. The one who is from the earth belongs to the earth and speaks as one from the earth. The one who comes from heaven is above all things. 32 He testifies to what he has seen and heard, but no one accepts his testimony. 33 Whoever accepts his testimony confirms that God is true. 34 The one whom God sent speaks God’s words because God gives the Spirit generously. 35 The Father loves the Son and gives everything into his hands. 36 Whoever believes in the Son has eternal life. Whoever doesn’t believe in the Son won’t see life, but the angry judgment of God remains on them.”

We need to understand that John the Baptizer’s ministry and message was to Jews and that it was about the God of Israel, the God of Abraham, Isaac and Moses.  It never would have occurred to John that his message or the baptism of repentance or even Jesus’ messiahship was for anybody else except the Jews.  He was talking to those who had turned away from their God or who had made the Law into their God.   He was reminding them that every time they had turned away things had gone badly for them;  other nations overran them, oppressed them, enslaved them . . . until they repented, and then God always sent someone to lead them back.   John’s was not intended to be a world-wide message.  It was a message to remind the ones who had been liberated in the exodus, the ones who had been exiled and brought home again, that God had promised them a savior and that God always kept promises.   Later the message Jesus the Christ preached would expand to include the whole world, but for right now, at the moment that John is speaking, his is still a pretty exclusive message.

But the thing is . . . even though John’s message was directed to the Jews of his time and place, it really does say something to us,  in the context of our Christian faith.  Those who don’t believe in Christ’s words, those who claim to follow the God Jesus preached about but don’t believe that Christ’s commandments need to be followed in every aspect of life, won’t know the life that John spoke of; not eternal life in heaven after they died, but joyous, loving, generous life in the Spirit, here and now, on this earth.  Those who worship the Law instead of God will know anger and judgement and surely, this is what we see in our world, in our Christianity today.  We see so many who claim the mantel of Christ speaking in anger, hatred, judgement against others.  We see so many who claim to love Jesus rejecting where he didn’t. . .

God's promise is still there for us.  And God always keeps promises.
Posted by Maria Tafoya at 2:04 PM No comments:

The God I know today

I've never written poetry before, except a love poem I wrote to a boy in 2nd grade which my mother   kept for reasons known only to herself.  But I realized the other day that some of my writing, when spoken, has rhythm and all I needed to do was make it look like a poem.  :)  I offer here my firstborn.

God lives in my heart.
God lives above, in the rays that poke through thick clouds.
And God lives in hospital beds
preschool playgrounds
in the tears of a suffering parent
in the cuddliness of a bunny
in the homeless guy sleeping in the church doorway.

The God I know today...
loves 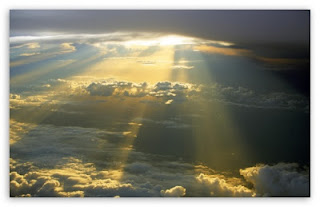 Posted by Maria Tafoya at 10:51 AM No comments: