What are you against? 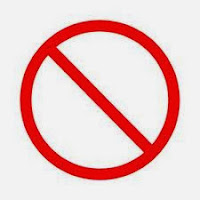 I just saw a Facebook post asking people to join a group or like a page or whatever named "Anti-Republican."  Really, people?  When's the last time someone turned to you during a conversation and asked, "What are you against?"

I mean, why do we have to be against something?  Why not just state loudly and frequently what we are for?  It seems to me that just saying "I hate them. Let's kick them out." is not productive. Rather, if you really would rather see different people in office say, "Let's find more centrist people to fill that position."

At the of sounding Pollyanna-ish, I have learned that it is usually more helpful to come at an issue from the positive side.  Rather than reacting or pushing back against a policy or person we disagree with, name the positive options that we favor.  So, instead of being "Anti-Republican," a name which will automatically alienate any moderate or progressive members of that party, name what you are in favor of.

In truth, I learned this the hard way.  I found myself pushing back against a sense of apathy and worry about the future of our congregation.  I would say things like, "We're not dying.  Don't listen to the nay-sayers. There's still hope for us."  And yes, the congregation is getting smaller.  And yes, I worried, too - about the congregation, about my job, about the kids who come to our preschool and our teachers, about the folks who come here for food... So I would beg the folks not to give up, to hang on to hope.

Then I started paying closer attention to our church treasurer.  Because he is also an Elder he has the opportunity to give the offering invitation once a month.   He might name some emergency or unexpected expense that impacted our bank account.  He will usually mention one of the big expenses coming up, like property tax or workers comp insurance.   Then he will start praising the congregation.  "I don't know how we do it," he'll say.  "We keep having what we need to pay the bills and take care of emergencies.  We still send money to the Mission Fund.  You are the most generous people ever, and I thank you."  Most always he ends with the reminder that with God all things are possible.

When I really started listening to him, he helped me remember that I'm the one in the pulpit. Yes, there might be folks out in the parking lot whispering and worrying (and maybe even plotting!), but I'm the one in the pulpit. I'm not here to soothe their fears and worries for the future. I'm the one whose job it is to comfort the afflicted and afflict the comfortable.  I'm not just here to tell them about loving the neighbor and the work that needs to be done to end oppression in the world.  I'm the one whose job is to remind them of just how awesome our God really is.  And that everything  really is possible with God.

So . . . I changed my tune.  I started telling the congregation exactly how much they impact our community.  I lifted up their generosity and compassion for our neighbors. I thanked them for their hard work packing lunches for the hungry and going around the neighborhood handing them out.  I tell them how different we are from other congregations.  We are smaller than we were 10 years ago, yes.  But where most congregations who've been around 50 years or more are populated mostly by silver haired folks, we are getting younger!  There are new young families and couples who have come and gotten involved in mission and worship.  I told them that we now have an energy that's very different from before and that energy comes from God.  It results from our willingness to do whatever we can to serve our neighbor with love.

Then people started coming up to me saying, "I was worried about my little church, but not so much now.  Now I have hope.  I know that God can make a way where there is no way."

I don't know what the future holds any more than anyone else does, but I do know that just speaking against whatever worries or frightens or angers me isn't the solution.  The solution lies in naming the good potentialities and working toward them.  The solution lies not in arguing or defending or defeating, but in shifting the focus from negative to positive, from anti-whatever to for something.

So, to you Anti-Republican folks out there . . . I am absolutely in favor of finding leaders with a more centrist view of the world than some of the folks who are serving in government now, but I think some of them just might sit on the red side of the aisle.  Maybe you could re-think your name?

Posted by Maria Tafoya at 1:59 PM No comments:

I wonder about all sorts of things. Sometimes my wondering wanders into the world of worrying.  For example:

Is it better to post numerous short pieces on my blog or wait until I have something essay-length to share?

My habit of late has been to make note of things I intend to write more about, usually on my phone or iPad.  I might have just an idea or as much as half a page of musing.  It might be a "this'll preach" moment or just some random observation.  The problem with this is that I almost never get around to "finishing" any of those pieces.  I usually don't even use the "this'll preach" bits in sermons.   I have dozens of these little gems stored as notes or in documents titled "blogishness".

It was easier to finish things when I was committed to contribute a piece every Tuesday on The Intersection, a social site for Disciples.  (That's members of the Christian Church (Disciples of  Christ), not the folks who followed Jesus around Judah and Galilee.). Or when I was more active in RevGalBlogPals.  Or, frankly, when I have any kind of deadline imposed by someone other than myself.

I am fairly certain it would be better for me if I were to practice the spiritual discipline of writing regularly in one place instead of having mini (unpublished) posts scattered all over my electronic devices.   I suspect my spiritual director - herself a writer of some note - would agree. I 'm just not very good at imposing this kind of discipline on myself.  Even titling this blog "Everyday Thinking" wasn't enough to motivate me.

Posted by Maria Tafoya at 10:11 AM No comments: