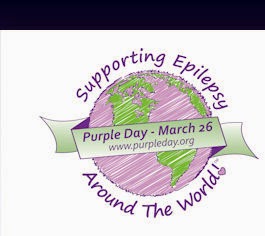 Fifteen years ago this month I was in the hospital recovering from surgery.  While I was there a couple who were (and still are) very important in my life came to visit.  We were talking about everything that was happening on campus and in other areas of mutual interest when suddenly the wife began to have a seizure.  Her husband caught her before she hit the floor and carefully laid her down.  I immediately hit the button for a nurse, who arrived very quickly and then . . . did nothing.  It seems that if one has a seizure while visiting someone else in the hospital, the medical staff are prohibited by law from touching the seizure victim.  Using some pillows from my bed, the husband made his wife as comfortable as possible until she was well enough to go home.

I didn’t understand what had happened.  I didn’t understand was how my friend could be standing next to me laughing one minute and having a grand mal seizure the next when nothing I could see had changed in the intervening seconds. I had always thought that if an epileptic takes her medication regularly she won’t have seizures. I realized I didn’t know enough about epilepsy became determined to learn more.

I was amazed at how many things that I consider part of daily life can trigger an epileptic seizure, like strobing patterns of light and shadow, and the electromagnetic frequency of certain light sources.  It turned out that something about the lighting in my hospital room triggered that particular episode.

I’m not an expert on epilepsy by any means. But I’ve learned some important things since that day in my hospital room.  Today, when a friend says, “I couldn’t get to the event because the shadows the trees were casting on the road were dangerous,” I know she really couldn’t safely continue driving.

I learned that the best thing I can do if someone near me has a seizure is to make sure she doesn’t hurt herself on anything nearby - not by holding her down but by moving things away from her.  I should not put anything inside her mouth - that can cause injury.  I should loosen her collar and remove her glasses.  I can ask people not to crowd around.  And then I should wait until the seizure ends, help her move onto her side and stay with her until she is sure she’s ok.  If the seizure lasts a long time - like 5 minutes - or if a second one begins right away I should call 911, but in most cases I won’t have to.

Fifteen years later my friend is still embarrassed that she had a seizure in my hospital room. I wish she didn’t feel that way.  The seizure that has caused her so much distress was the trigger I needed to learn more, and to share what I have learned.

Posted by Maria Tafoya at 12:01 PM No comments: