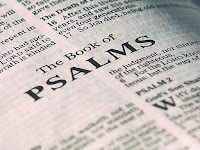 4 The voice of the Lord is powerful;

the voice of the Lord is full of majesty.

5 The voice of the Lord breaketh the cedars;

yea, the Lord breaketh the cedars of Lebanon.

6 He maketh them also to skip like a calf;

I am not usually a fan of the King James Version of the Bible. It is difficult to read and understand because of the archaic language, and the language shift over the centuries since this translation was completed in the Year of our Lord 1611.  However, I make an exception for the Psalms. They just ring more beautifully when read aloud or chanted from this particular translation.  That’s probably the same reason we resist modernizing the English in Shakespeare’s plays, which were written not long before the KJV.  Even though half the time we have no idea what the actors are talking about, we enjoy simply basking in the sounds of the words.

I also love Gregorian chant, which is much simpler than the complex and beautiful chants we sometimes feature as special music or responses on Sunday mornings.  For several years I would chant one Psalm every morning as a Spiritual Practice.   I got as far as Psalm 22 when I first found the word “unicorn” used.  When I looked further, I discovered that unicorns appear 9 times.  But . . .there’s no such thing as unicorns. They aren’t part of Hebrew mythology.  Every other translation says wild ox where ever the KJV says unicorn.  So how did unicorns end up in the King James Version of the Bible?  No idea!   We do know that the scholars in the early 1600’s did not have anywhere near the  vocabulary in either ancient Greek or Hebrew that modern scholars have access to.  In the past four hundred years many discoveries of papyrus and scrolls dating from those times have increased the number of words we know, and the context in which those words were typically used.  So modern translations from the original languages tend to be more reliable when it comes to word-for-word translation.

But unicorns make such a lovely visual.  Whenever I read this, I imagine a perfect white unicorn skipping down a hillside, filled with the joy of living.  This is a thing that God has made.  And it is beautiful.

Creative God, we tend to get stuck in fussing over what is accurate and what is true.  Let us stop worrying about literal accuracy just for a moment, and rejoice in the beauty of your imagination - including unicorns.  Amen.